Our Lady of the Grey

I’ll admit, this one hits a personal nerve. I am one of those women who was subjected to assumptions about whether my family obligations interfered with my commitment to work. I know many women who shifted thriving careers to focus on family and when they were ready to rejoin the workforce, their careers stalled and in some cases compensation didn’t even match what they started with and progress stalled by a reduced tolerance for aging women at work.

Women are outliving men but are being forced out of the workplace earlier. These generalizations often take the form of stereotypes with the older women traditionally seen as inactive, unhealthy, asexual, and ineffective.

Here Our Lady is seen as both her younger and older self. For better or worse, we often do not embody ‘correct’ examples of our age as others may perceive it.

Ecclesiastes in the Bible, an almond tree is used as a symbol of age, and so almond branches in various stages of bloom are her halo.

Her face and hair show both youth and experience-exuberance and trial.

Her younger side wears bright pink. Her older side, red or an ‘older’ pink.

The Maiden side holds a mirror facing outward. She is concerned with her own appearance and how she is perceived. The Crone carries a shepherd’s crook. It is a staff she can lean on and a symbol of ‘caretaker’ status. Note that the top is a question mark, representing a position she may have been put in that she did not want for herself.

I’m not in a mentally stabile enough position to discuss this further than just posting what inspired this particular work….

St. Stacy of the Incels

If hate could get you laid, then misogynists would rule the world! We do not ‘owe’ any one our bodies or our affection. We are not property to be bought, sold or traded. Love is not currency. St. Stacy is modeled after the ‘perfect woman’, Barbie. She wears the color of the Madonna, hiding her figure until the mantle purity. She guards her heart, the heart of all women. Although it has been wounded, pierced, it is still vibrant and full. It is hers to give. Her halo is stones. To remind us of those lost to ‘Honor Killings’. She is surrounded by ‘cherubim’. Infantile, not infants. They ridicule and taunt her out of fear, ignorance and resentment, and yet, like Barbie, she smiles on. 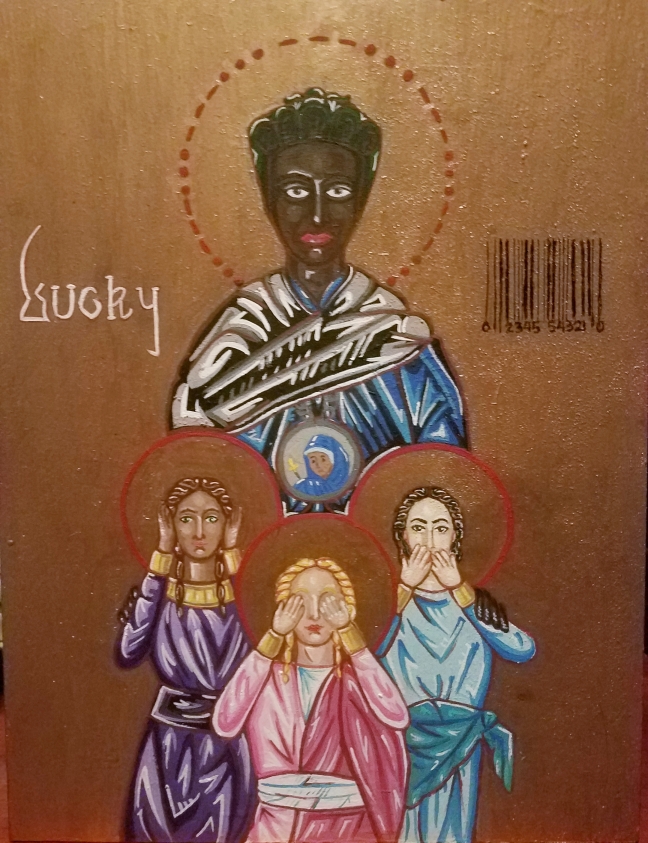 I admit that the research on this one took a great toll on me. I have to daughters and night after night I read articles on the horrors of the sale of humans. Of girls. (I gave out A LOT of unsolicited hugs). To get myself through I turned to a woman of faith, St. Bakhita, who triumphed over her own slavery to dedicate herself to the service of God. Something that as a ‘high up on the food chain’, white woman with a great life, I am still too scared to do.

Modeled after Saint Josephine Bakhita, who was a victim of human trafficking. She became known as the ‘Black Mother’ and touched many lives with her faith. Close to her heart she wears a medal of the Blessed Mother, whom she was devoted to after her conversion.

Bakhita was not her birth name. It was a name given to her by one of her many slave owners. The name meant “lucky” or “fortunate one” and this is represented on her right. This is another abuse of mockery, perhaps, during horror as she suffered beatings, torture and sexual abuse from when she was first purchased, at the age of 8, hence the bar code on her left.

Bakhita was sold many times during her years of brutal slavery. One owner forced her through scarification and tattooing. This treatment consisted of deeply cut wounds into which salt was poured to produce permanent scarring. A total of 114 intricate patterns were cut into her breasts, belly and into her right arm.

Her halo honors her scars through the Morse Code symbols for ‘Help’-S.O.S.

Her hands support girls of many races as trafficking knows no bounds. These girls are pictured in pastel colors symbolizing youth and with traditional, pure halos and evidence ‘see no evil, hear no evil, speak no evil’, due to the sad fact that there are still dark corners where the sale of women and girls is common and encouraged.

OUR LADY OF IMPENETERABLE SANITY

Modeled after St. Dymphna. After her mother died, Dymphna’s father went into a deep depression and became mentally unbalanced. Hid feelings for his daughter turned to lust and why Dymphna rejected him and fled, he hunted her down and had her beheaded.

Before her murder, she opened a clinic for the poor and sick and believed in working on mental as well as physical ills. In art she is portrayed as the ‘demon slayer’ as at that time most mental illness was deemed possession by demons and/or need for conversion.

In some older versions of her portraits, she is, seen with a sword pricking the neck of a demon; symbolizing her title of Demon Slayer.

Throughout history, women have been persecuted for there diminished coping skills and mental acuity. Hysteria is undoubtedly the first mental disorder attributable to women, described in the second millennium BC, and until Freud considered an exclusively female disease. Over 4000 years of history, this disease was considered from two perspectives: scientific and demonological. It was cured with herbs, sex or sexual abstinence, punished and purified with fire for its association with sorcery and finally, clinically studied as a disease and treated with innovative therapies.

Today we are still shamed an ostracized (even by ourselves), for the need to seek help, treatment or medication for mental illness, especially for working professionals and mothers where the need to constantly be ‘as good as or better than’ is the social norm.

In the painting, her halo is a gear, a ‘cog’. Mental health care is an industry and she is connected to it by her old-fashioned electro shock therapy conduits. Her crown rests on top. Her belief in herself her glory. An angel rests on one side. A devil on the other, representing the theory that mental illness can be explained away as the demonic. The severed neck of St. Dymphna is represented. The covering failing to hide it, as if removal of the head would solve all her problems. She is clad in blue, her attempt to cover herself in calm. She holds a book as if to shield herself and force us to look at it-the Diagnostic & Statistical Manual of Mental Disorders.

I have had several people ask me what lead me to develop this current series of icons and what inspires my symbolism. So for the next few weeks I’ll be sharing these pieces and their notes with you. It’s been a long labor of love.

OUR LADY OF SELF DEVOTION-inspired by Mary Magdalene.

‘Body image’. What is the perfect body and why do we strive so hard to try to achieve it? I think most women who say they are happy with their physical self don’t mean it. What makes it so hard for women to love themselves as we grow and change into different stages of ourselves. At what stage did we need to start convincing ourselves that we are worthy of self-love?

It was Mary Magdalene, a woman, who went and told the twelve Apostles that Jesus had risen from the dead; for this she is called “Apostle to the Apostles.” Mary was a prostitute, considered to be the lowest caste. I used the number 7 in the lucky slot machine design because Mary is said to have suffered from 7 demons and 7 is the number of completeness and perfection (both physical and spiritual), and the number 7 is the foundation of God’s word.

Her halo is 3 imperfect circles in honor of the creation in the trinity. She wears purple robes of royalty to symbolize her status among the male Apostles and she holds up her cradle of creation, which has the fierceness of teeth.

When Mary traveled to spread the Gospel, it is said she carried and egg, the symbol of creation, that would change color to red. Eggs were what helped people to understand a new theological truth—the resurrection of the dead, and a new religion—Christianity—built around the first Resurrection.

Women are of the creator and creators. WE ARE PERFECT AS WE ARE. WE HOLD TRUTH-THE TRUTH IS RENEWAL AND RESSURECTION.

“I got you a leaf Mama. I like when you paint leaves.”

And so…I painted leaves. I didn’t know how much I needed to. How did she know? She’s 8. How could she sense what I needed better than I could?

Artists are often asked what inspires them-fellow artists, periods of time, methods and materials.. I’d like to talk about what encourages me. Thanks to the Virago Gallery I’m still busy at work creating a new line of pop icon paintings regarding women’s issues. 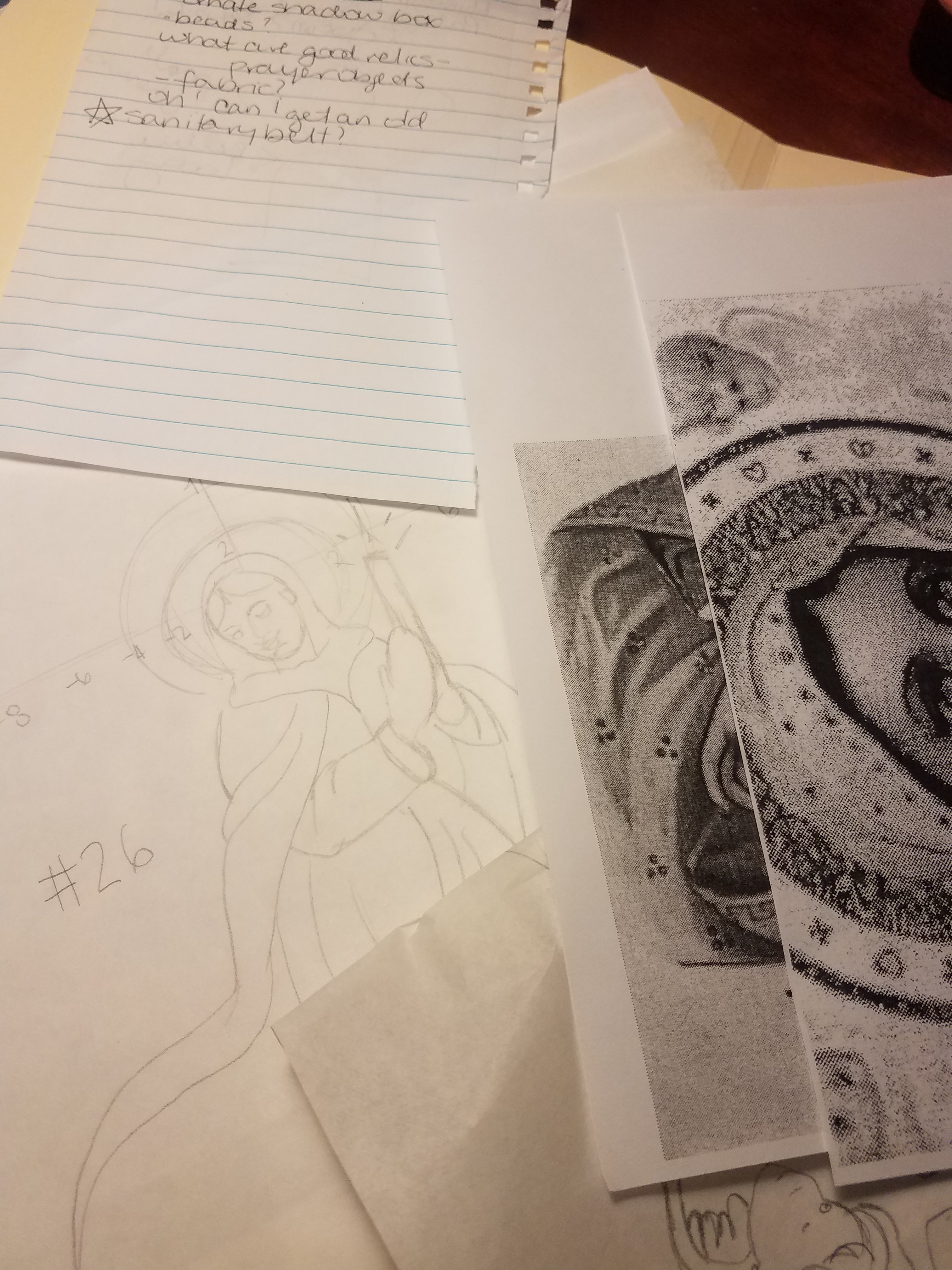 I’ll admit it takes a lot out of me to research, layout and execute one of these. The painting brings me joy. The act of creating is fulfilling. The fact that I get to share my thoughts on things that are important to me is humbling. What keeps me slogging through articles about human trafficking, rape, glass ceilings and mom shaming without needing to spend a week with the covers over my head is my girls. There uncanny ability to pull me back into focus, wrap me up in perspective and fill in gaps of despair with painting leaves and ‘snuggle puddles’.

I will be posting more of my journey through these paintings.  It’s important for me to share not only because I believe in the messages and some of them are very timely, but I believe in the PROCESS of how they are becoming. How I do, not just why I do. And I will share the breaks in between. The leaves.

Something to keep in mind this week. Sometimes what we create in the small is just as important as what want to create for the big picture.

My issue to go into. It started out as something fun and light hearted I could do while I was recovering from surgery. I was sending them out to friends until I was challenged to deeper, to really look at what we’re putting out there-the messages we are sending to each other, the hurtful images and unrealistic goals we still put on ourselves and other women.

I’ll be sending these postcards out and will track them on social media with the hashtag #herartforgood. If you would like one or know of a place where one would make an impact, please let me know! 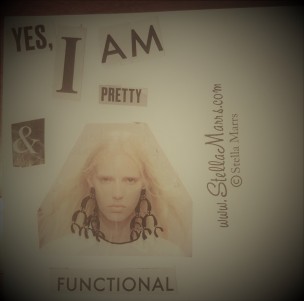